Polar bears are found in the arctic north of  Alaska, Canada, Russia, Greenland, and Norway.  They are the only bear to be considered a marine mammal and are at the top of the food chain.  Male polar bears, called a boar can range from 775 to 1200 pounds.  Female polar bears called a sow are 330 to 600 pounds.

Female polar bears typically give birth to twin cubs and will care for them up to 28 months.  Although they only have one male partner he has little to do with the upbringing of their offspring.  In fact, if a male polar bear is hungry he will have no problem hunting his cub for dinner.   The mother is the sole provider of cubs teaching them to hunt and survive their extreme territories. 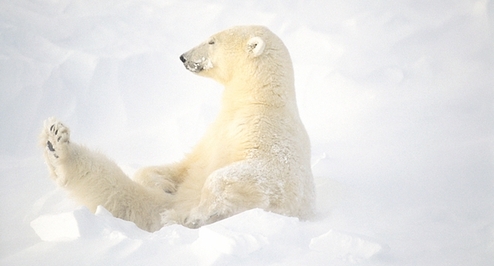 There are a few components that set polar bears apart from other mammals; the ability for their blood pressure and heart rate to drop during hibernation, their blood cells have also adapted to hold more oxygen allowing them to swim under water for longer periods of time, and their blood vessels are dilated to accommodate more blood for enduring frigid temperatures.

In May 2008 polar bears were listed as a threatened species under the Endangered Species Act.  This is due to ice loss in the Arctic, because of global climate changes.  Polar bears depend on the ice over the seas for hunting seals, which are their main source of fuel.  Biologists estimate that there are about 20,000 to 25,000 polar bears roaming in the wild.  60% of those are thought to be in Canada.  This population is estimated to have dropped 22% since 1980.