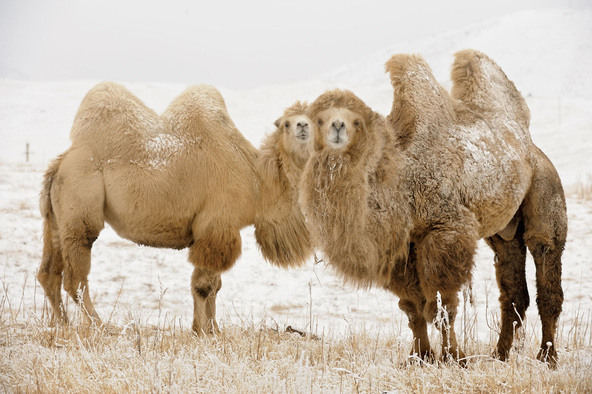 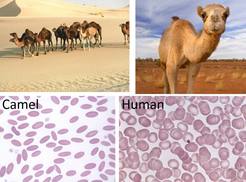 Camel's Red Blood Cell
The red blood cells in camel are oval instead of round (see picture on the left). Due to the oval shape, their blood cells are able to expand to 240% of its original volume, whereas the red blood cells of other animals can only expand up to 150% (National Geographic, 2014). This allows the camels to drink up to 30 gallons of water in 13 minutes to recover from dehydration. This elongated shape of their red blood cells also allow the ease of traveling in thick blood and narrow blood vessels during dehydration (Ouajd & Kamel, 2009). Their hemoglobin also have a higher affinity for oxygen than other domestic mammals (Ouajd & Kamel, 2009). 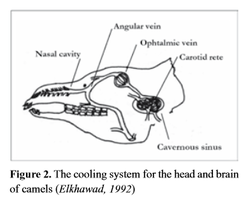 Cooling System for Camel Brain
Camels rarely sweat to cool itself even when it hits 120°F. So, how do they cool themselves? They cool their bodies by facing the sun and hide their bodies in their shadow. When the face is facing the sun, the brain will overheat. So, what they have in place to cool their brain is a selective cooling system. Camels have a "rete mirabile," or according to Merriam Webster dictionary, "a small but dense network of blood vessels formed by the breaking up of a larger vessel into branches usually reunite into one trunk and believed especially important as an oxygen-storing mechanism in aquatic mammals." For camels, it also functions in a similar way. According to a research, the dromedary camel can selectively cool its brain with the venous blood circulation (Ouajd & Kamel, 2009). Its nasal and angular veins (veins under the eye) become widened. Its facial veins around the nose become constricted in order for the venous blood to go to the cavernous sinus to cool the arterial blood through heat exchange in the carotid artery (see figure to the left).
Why does this work matter?
There are very few researches done on camel comparing to other animals like monkey and elephant. This research helps strengthen the foundation of the physiological research of camels. It will allow the future scientists to look deeper into camel's biological adaptation in the desert. It shall serve as a building block for greater findings in the future because a lot is still unknown about camel. For example, it is still unknown how oval red blood cells differ on the molecular level comparing to the round ones or how it becomes oval in the first place.

Inside Nature's Giants - Camel Documentary
(I apologize for the bloody cover of the video!)

Please click links below to skip to the following animated sections:

Why should we care about research on camel?
Deserts are not always deserts millions of years ago. By learning more about camel's red blood cells, we will be able to see how they have evolved over time on a molecular level in different environments. Perhaps, we will be able to track down that they are related to some animals who have become fossils. From there we might find a new migratory route for the camels millions of years ago. The more we learn about the "unknown" in our past, the better we understand the present; and from this, we will be better in predicting the future. For example, if we learned how camel's red blood cells have evolved, we will be able to understand how they are oval today. From this, we might be able to predict how camels' red blood cells behave when they are vulnerable to certain diseases. And all of this will not happen without camel researches.

**End of Camel Blood**
More Interesting Information About Camels (Will not be quizzed! Optional) 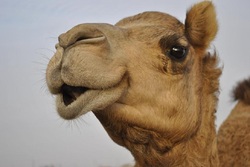